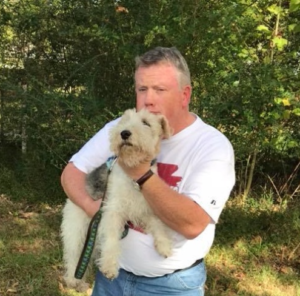 What do you love about The Episcopal Church?
The Episcopal Church has doctrine but is not absorbed by it.  It always comes back to “. . . loving my neighbor as myself”  with the Episcopal Church – a command that is simple to understand but hard to do.    That command has kept my mouth shut when it needed to be closed.  That command has taught me to be a better listener.  That command has allowed me to be not just tolerant but accepting of others who don’t live the same way I do.  That command has enabled me to develop my ability to be empathetic and to look for the “Jesus” in everybody – even those who don’t profess to be Christian.  That command constantly reminds me to be humble.  That command helps me recognize that I have a long way to go.  That’s why I love the Episcopal Church.
What do you think All Saints’/Todos los Santos provides our Northwest Arkansas community, and Bentonville in particular?
All Saints/Todos los Santos provides a place where believers, non believers and those not sure can meet, discuss, learn and, most of all, be the best version of themselves that they can be.  Every community should have an All Saints/Todos los Santos.
What are you most excited about at All Saints’/Todos los Santos?
Twenty four months ago when Father Roger was on sabbatical, I stood up in front of the congregation as the Senior Warden not really sure what the future would be for All Saints/Todos los Santos.  After talking to some parishioners that were much more  familiar with the workings an Episcopal Church, I was concerned because I had some strong suspicions that Father Roger would be seeking a job nearer his daughter and granddaughter in New York.  Furthermore, our Lutheran friends were toying with the idea of selling their church on Central and building elsewhere.   Sure enough, Father Roger found a job on Long Island and the Lutherans put their building on the market.  So, we banded together and found First Christian Church to have our services and with the help of Bishop Benfield and Canon Alexander found Mother Sara to be our Vicar alongside of Padre Guillermo.  I am proud because we, as a congregation and a vestry, were able to overcome some profound obstacles and still maintained much of our faith community.  We have some very strong and dedicated leaders that will move us forward.   That excites me about the future of All Saints/Todos los Santos!
What’s something interesting about you that most people wouldn’t know just by seeing you on Sunday morning?
Few people know that I spent summer evenings and early mornings as a youth hauling hay in fields that now house hotels, restaurants and offices around Rogers and Bentonville.  I have wondered if I need some sort of psychotherapy to deal with all the changes I have witnessed here in Northwest Arkansas watching 4 distinct small towns grow together to become one metropolitan area.

From the Presiding Bishop…