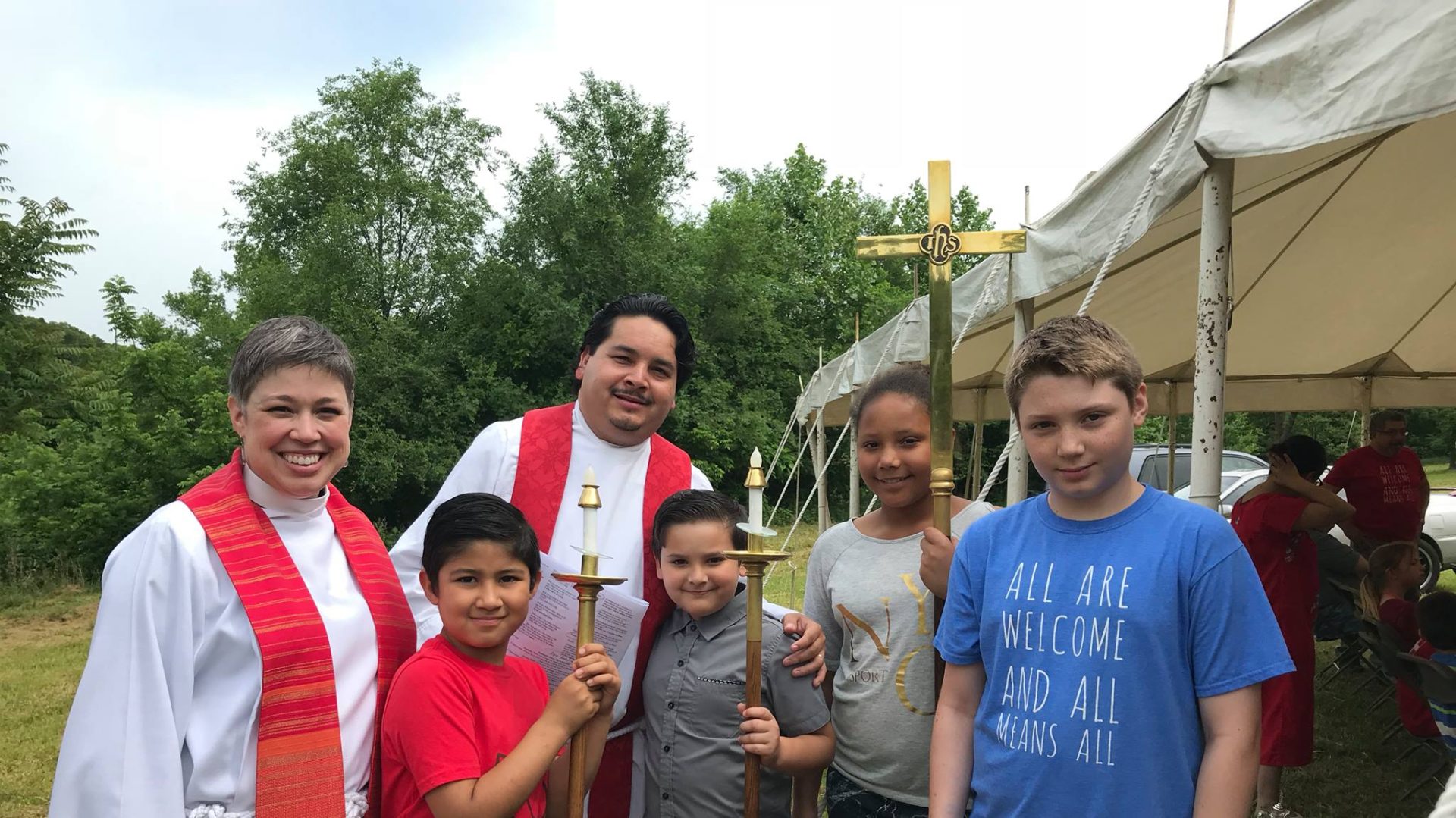 Jesus doesn’t mince words or hold back. He’s all in. He is who he is, and he knows their hearts, their questions, their doubts. He knows they’re going to want him to perform a parlor trick to prove himself. He knows the precedents that say it doesn’t go well for prophets, especially in their hometown.

And just like that, the crowd goes from amazement to rage in the presence of  one so self-realized, the embodiment of Truth, a mirror held before them a little too clearly for their liking, if they even understood. The challenge presented in the person of Jesus was too much for them to deal with, so they try to throw him over a cliff. (But Jesus’s time to be killed has not yet come.)

When I say that Jesus is “all in,” I can’t help but think about all the fans gathering in Atlanta that we’ve been hearing about on the news. Maybe you know a fan or two, if not for the Rams or Patriots, at least for the Razorbacks, right? One of my faults as an Arkansan is that I’m not fanatic about sports. Don’t get me wrong: I can be competitive, and I’ll cheer for my kids with gusto. I’ll also cheer for the “other” team and wince when anyone gets hurt or makes a bad move. I’ll watch games, even play games with focus and presence, but it’s not what I consider myself fanatic about.

When we’re “fanatic” about something, our enthusiasm defies all reason, doesn’t it? A quick definition search reveals that “fanatic” is defined as “a person filled with excessive and single-minded zeal.” It’s easy to shorten the word and end up with something that sounds harmless, right? A “fan” just sounds like someone who’s rooting for a certain team/party/religion. Surely they aren’t zealous, are they? But “zealot” is a synonym for “fanatic.” Paul was zealous for his religion. Paul took his fanaticism to an extreme and persecuted those who didn’t conform to what he thought was the only way. I hope that all the “fans” at the big game this weekend keep their fanaticism in check and don’t lose sight of the common humanity and sportsmanship to be shared between good neighbors and responsible adults.

Paul has much to teach us about maturity. “When I was a child, I spoke like a child, I thought like a child, I reasoned like a child,” he says, but “when I became an adult, I put an end to childish ways.” If you’ve ever tried to reason with a two-year old, you get what Paul is saying here: the efforts are futile with an unreasonable child, likewise with someone excessively and single-mindedly zealous, for whom there is no other way. But, “when the complete comes, the partial will come to an end,” Paul also says, when we can “know fully” even as we “have been fully known.” What happens when we can see in the mirror fully, when we have a clearer picture, a broader view, a fuller perspective of the greater picture?

And what is it that enables our completion, our fulfillment, our knowledge, and our perspective?

Love of God. Love of neighbor. Love of self.

That’s why Love is the greatest of all gifts, as Paul says, the most excellent one, the one which if we don’t have, we can scrap all the rest because it won’t bring us closer to God.

Often First Corinthians 13 is used in weddings as one of the readings because of the emphasis on love and the characteristics that are exceedingly helpful in maintaining a successful relationship. But this love isn’t the romantic (eros) or brotherly (philos) love; this is agape love, the highest form of love, of charity–the kind of love that exists between God and all of us. It is this kind of love that completes us because it’s what we all seek.

With the love of God, we know whose we are and who we are. We are more likely to find what our calling is because we have an honest, open relationship with God. Self-knowledge and self-awareness are powerful things, particularly when lived in relationship to God. It doesn’t mean we don’t doubt or question–all the prophets do that, as we heard in Jeremiah and can find in every call of every prophet. But there’s clarity.

Following his baptism and temptation, Jesus was fully known and beloved publicly, for all with eyes to see and ears to hear, and he was coming out to his family and friends in his wholeness. In his openness and honesty, in the fullness of his being, there were people who couldn’t handle it, who couldn’t comprehend what he meant, what he was saying, what he was representing. It was “other-ness” to them that was threatening, and their survival response was to get rid of it, even if that meant killing a person.

Singleness of vision doesn’t always present itself in such fanatic ways. Status quo is upheld by a majority’s concession to one way of being as the norm. It can just be the way things are, and people go politely about their way. It can be unnoticed, latent, until something happens, and a greater truth is revealed. And someone comes along and says “this is who you are” and “this is what you’re standing for,” and it’s unrecognizable as Truth because we’ve conditioned ourselves to see ourselves as good people who could never do or be something so ugly and unrecognizable. It’s not what we meant.

Again, we need–we rely upon–that agape love, that unconditional love to see us through the hard work of seeing ourselves and being who God created us to be. It’s a given that we are beloved children of God as we are right here, right now, but if you’re like me, we have a lot to learn about being Christ-like, about being the best Christians we can be.

I say this because it’s Black History Month. I know woefully little about black history in Northwest Arkansas or in Arkansas generally. At the bishop’s suggestion, I researched Bishop Edward Demby, the second black suffragan bishop in The Episcopal Church, who was here in Arkansas in the early 20th century. He was one man to support the segregated congregations, initially without receiving compensation or housing. I plan to attend as many events as I can throughout the month, starting with Raven Cook’s talk in Fayetteville Sunday entitled “Celebrating Black Women’s Resistance.” I have a stack of books to read, including White Fragility by Robin Diangelo, which will be the focus of our next few Continuing the Conversations, and the community college has a section of books relevant to black lives for everyone’s greater understanding. If we don’t understand why having a Confederate Statue at the center of our town square is offensive to many, I guarantee that we have a lot of work to do on self-awareness individually and as a community. And we need agape love to see us through the learning, the healing, and the reconciliation that will take us into a more beloved community.

I also say we need the kind of love that Paul speaks of and that Jesus embodied because we’re about to show a documentary about homelessness. In Northwest Arkansas. To present such a film and discussion says that maybe everything here isn’t wealth and abundance, roses and sunshine. When temperatures dropped into the single digits on Wednesday night, Padre Guillermo called me to ask me where a homeless person goes in Bentonville because a parishioner was trying to help someone from sleeping on the street. Apologetically, I told him that the Salvation Army is the only place in Bentonville. Otherwise, you have to go out of town. If you’re not a domestic abuse victim, the women’s shelter isn’t an option. If Soul’s Harbor or any of the other homes are full (for which there’s usually an application process), you’re out of luck. A hotel room is often your only choice, which is what they did that night–not unlike the generous donors in Chicago and probably thousands of other untold cities and towns. Holding up a mirror and realizing the reality of a situation is one of the first steps to addressing a solution. Identifying common practices, common hurdles, and characteristics of poverty are all part of being able to look honestly at homelessness and start chipping away at creating pathways to safe and stable environments for everyone. They might not look like what we think they should look like, but with love and mutual respect, we can create relationships that honor one another and bear fruit for the kingdom.

To do this work of being Christian, the only thing we need to be fanatic about is keeping love at the front and center. In all that we say, think, and do, does it reflect love of God, neighbor, and self? If not, why not? If so, what’s the next step?

We might have people who want to push us over the cliff, but we mustn’t forget that God is our crag and our stronghold, that rock jutting out to give us footing when we’re on the edge of our comfort zone and entering the dangerous territory of doing truly good work. God is our hope, our confidence, and our sustainer. Let us never be ashamed of the work we do in the name of God and for the sake of Love.