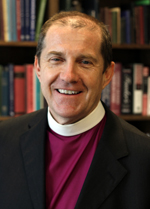 A Letter from Bishop Benfield

Tuesday I read that the regular period for filing bills during this legislative session ended on Monday. It appears that more than 2,000 bills were filed. I told you last week about the resolutions that our diocesan convention approved and to whom I sent them.

Consistent with my desire to let you know when I use diocesan letterhead to express an opinion to our legislators, I have sent one additional letter. Arkansas House Bill 1628 would give medical personnel the right to withhold treatment to people based on the caregiver’s religious beliefs or moral convictions. I wrote the chair of the committee to which it has been assigned with my statement that the Episcopal Church is committed to the equal treatment of all people (as evidenced in our diocesan resolution on transgender persons), and that using “religious beliefs” or “moral convictions” as a way to deny treatment to people with health issues is ill advised. It appears to be yet one more attempt to return to an earlier era of widespread legal discrimination. My concern as a member of the clergy is that allowing Arkansans to discriminate based on religious belief in the long run hurts the church, as people begin to identify the church with discrimination.

As always, I stand ready to listen to your comments on when it is good for the church to speak out on various issues and when it is not. We all can learn from one another on what is the appropriate role for the church in society and how we make those sorts of decisions. It is how we grow ethically.

This site uses Akismet to reduce spam. Learn how your comment data is processed.

Welcome to our service of Holy Eucharist this Second Sunday of Advent!